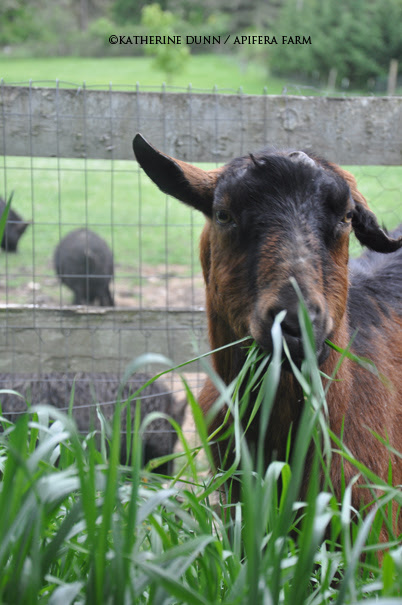 I was working today in the studio and happened to glance out back, and there was Stevie! This may not seem like a big deal, but Stevie rarely walks farther than the orchard area, which is about 15 feet from his outdoor shelter he likes. He spends most of his time resting, nibbling hay there, and to have him come all the way to the studio was really a milestone, a tender moment for me.

It means he's feeling good and he realized,

"Man, there is really tall grass over here."

I decided to let him into the back studio yard, usually off limits to anyone except the labs, just so he could relish all the tall grasses to himself, and help me out by trimming it down.

Stevie came to us from Sanctuary One. He was part of a huge rescue by the county of his herd of 30, and he was the worst off. He had been on his knees so long that he could not straighten his legs, so a vet and the Humane Society gave him an operation to at least allow him to get off his knees.

I am not a rescue, never have been, nor am I a rescuer, nor do I want to be. I adopt special needs or elders when I can [you all know them as The Misfits], and let them live the rest of their lives here, even if it is for weeks, or months. When I first heard of Stevie, it was because I was looking to adopt a pot belly pig-and was led to Rosie at Sanctuary One. But she came with her very own crippled goat, Stevie. Many of you know the story so I won't repeat it again.

But I anted to do this second post of the day because when I saw him out back, grazing, in a new place than his usual, seeing him active, it just lifted me in spirit. When I first saw a movie of Stevie before we decided to adopt him and Rosie, I wondered if it had been the right thing for him, to give him this operation. I think some times rescuers are so intent on 'saving' that they forget to step back and assess the animal, and what it really needs to be comfortable as that particular animal, both physically and emotionally. I am not criticizing rescuers, I'm pointing out something I've observed in the past 10 years of seeing various animals come to my attention.

But when I saw Stevie today, it was one of those moments I've had repeatedly living with him-that he does have a quality of life here and he does seem happy. To know he came over this far to the studio, it shows he was feeling pretty good. Maybe tomorrow he'll be a bit sore, but he looked very content. I thought we were losing him last May, when he kept casting. But he worked out of it, I don't know why or how, nor did the vet, but he did. [This is why his one ear is crinkled, it is what happens after he suffered from hematoma to the ear from hitting his head in his cast state, trying to get up.]

And yes, I did get a Stevie kiss just now. He never leaves without one, I know you think I'm exaggerating, just as I thought Sanctuary One was when they told me he gave kisses-but he does.

If you love Stevie, you can always subscribe or donate to help off set the monthly costs of caring for our special needs Misfits.
Posted by Katherine Dunn/Apifera Farm at 5:24 PM

Stevie is a kissing sweetie.