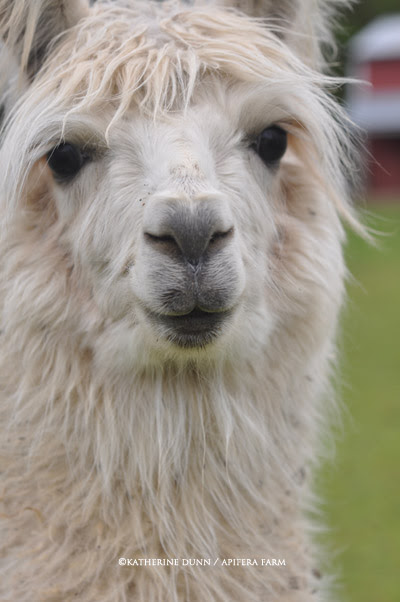 This little lady is really endearing to me. It started the minute I met her at her former home where she was bred and born. I had intended to bring home one llama who would be with Aldo most of the time, but also the main flock, to help keep me comfortable when we try to further develop the upper fields.

But this little imp came right up to me and acted like I was her long lost mother. The breeder also noted that her behavior was really amorous, and that she might not be a good guard candidate because of it. I went home to think about it and knew the right thing was to bring home one of the males, but the face of the white girl kept returning to me. I resisted. I have no intention to breed, and it would mean keeping the male separate until I could geld him-llamas need to be about 18 months before being gelded, so we have about 8 months to go.

But I realized Aldo was old, and had lost his life time mate before arriving here, so thought he'd really love a new girl to grow older with.

When I brought her out to meet Aldo, he was not in the least interested. And after about a month now he has settled with the boy, after spitting a lot the first couple weeks.

But I do not regret this decision. It is almost as if she was meant to be here, for me, I don't know the underlying significance yet, might not ever know that, but I know she and I will have a significant relationship. Because of her willingness to interact with me, I plan to walk her on the road and collect trash every now and then. She and I will have a job together. Maybe I'll have her pack a tea caddy up the hill for afternoon scones. Who knows what one woman can do with a willing lady llama. Maybe her role is just to be, as I be along side her-pur enjoyment of companionship.

Birdie. And on special occasions her name is Lady Birdie.

Birdie currently lives with Boone and Wilma, and has the rams next to her. She sometimes grazes with them and will eventually switch pastures, back and forth, she is very versatile that way. All the llamas seem to be. Aldo and the black boy-who I have named Ollie Ollie Oxen Free are getting along fine, and are on duty in the lower side fields with the main flock. Ollie is a goof ball and looks like a Kukla, Fran and Ollie puppet to me. His fiber is beautiful. He is gangly and childlike in his movements but has settle in just fine. As for his desire to come take selfies with me, not so much-but that is fine. Our relationship is meant to be much more distant. He is to bond with sheep, not women. 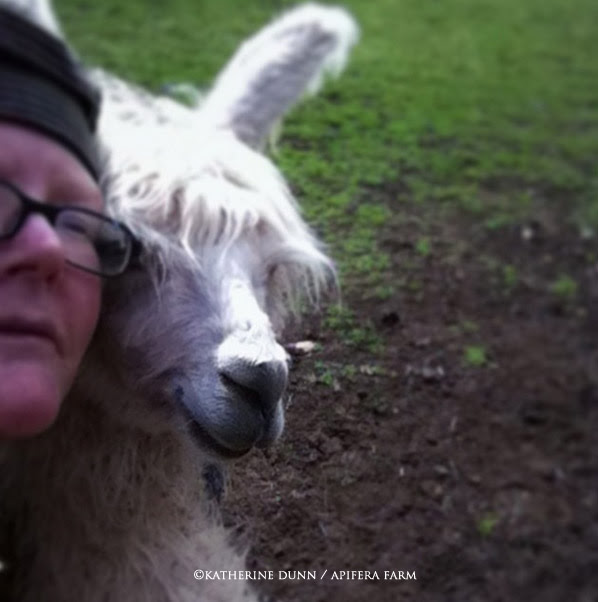 Posted by Katherine Dunn/Apifera Farm at 11:27 AM

Hi Birdie, you have a so sweet face. xox

*gigglesnort* that's by far the best animal-selfie i've ever seen...Birdie has a very beguiling smile. :)

I totally agree..."Birdie has a very beguiling smile." I never realized a llama could look so pretty!