The barnyard puts on a play...oh dear 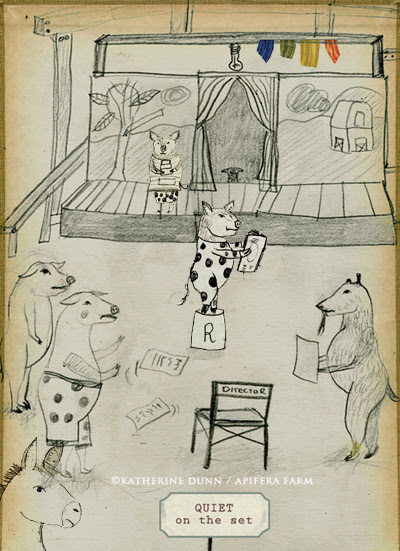 I knew something was up. I had heard lots of pounding of hammers, or one hammer, and a sawing sound, which is always scary when it is coming from the barnyard during the week, since The Dirt Farmer is not home. I was busy, really didn't want to be bothered with diversions, but when I looked out the studio window I realized i better get out there.

I entered to find some of the pigs in heated discussion with The Head Troll–something about inappropriate dialogue in their scripts.

I have learned to step back and observe before offering assistance in these matters. While they are my charges, The Head Troll, as well as Marcella, are my under soldiers and I have to let them manage without my interference if at all possible. The Head Troll threw her arms up in the air, tossing her notes to the side and fell down into her director seat.

Where did they get the director seat, I wondered. Best not know, for now.

Earnest came over to sit with me. He was the only one not wearing an outfit.

"My pantaloons didn't fit me, so I am naked for the dress rehearsal," he told me.

Apparently The Head Troll got a bee in her bonnet to put on a play. She was inspired by some old movie where everyone works together and builds the set and make the costumes and someone writes and directs, and at the end of the summer, voila, an audience is given the gift of a play.

I have got to toss that old TV out in the milk parlor, even if there is no sound on it.

At first, the idea of a Misfit Summer Stock seemed like a really bad idea to me. I have a show myself in the fall, and a workshop in June, and Pino Pie Day, and a Pino book mobile-the added pressure of helping out with a theatrical production starring pigs and crippled goats seemed like bad timing.

But as I got up to leave, I looked at the trial set they had built. It was a miracle it was still standing from the raggedy way they made it-but I immediately got a twinge of excitement.

This is just what I needed, I thought. A Misfit production to be part of, something fun and real, with living creatures instead of a computer screen of profile photos. I remember as a child watching Spanky and his gang on television. They were always putting on a play of one kind or another. I partook in each one in my mind and then would go out and try to do one on my own, with myself and my dog. It was never quite the same.

So here I had a wonderful opportunity presented to me-to be part of a gang! To put on a show!

I asked the Head Troll what role I might have, or how I could help. She said she will be back with ideas soon, but her first priority was to rewrite some pig dialogue.

Stay tuned as the Misfit Summer Stock progresses in the coming weeks and months!
Posted by Katherine Dunn/Apifera Farm at 1:08 PM

Spanky and our gang have nothing on the misfits. Looking forward to their adventures...xox