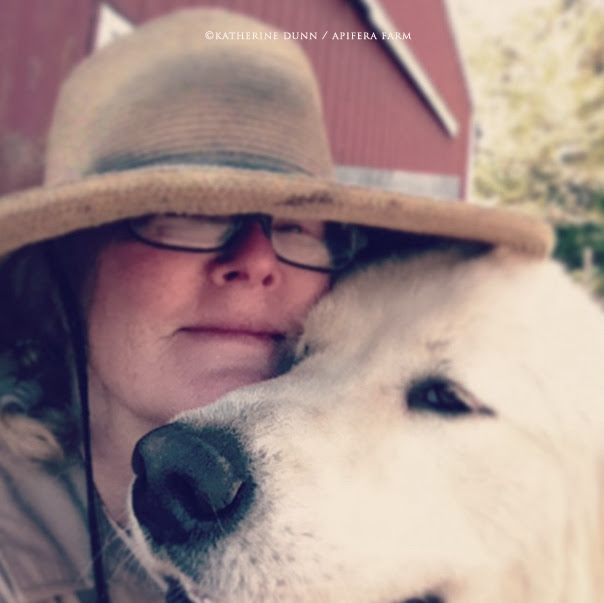 The casting call was abruptly cancelled because I inadvertently had scheduled Moose and Goose to be on clean-up crew in the chicken garden where I need to plant my sunflowers. The Head Troll was remarkably polite about it, since it is rather hot today, and she keeps changing the script. I was relieved too, I had so much to do this weekend with the vegetable garden getting tilled and planted and....Misfit haircuts.

Firstly, I took some selfies with The White Dogs. So trendy of me, yet so...what's the word-annoying! I decided why not become part of the narcissistic selfie generation of small farm-artist-writers who take pictures of themselves over and over...and over. The Head Trolls said I need a wand thingy to make better selfies but I said absolutely not, it is bad enough we are taking selfies let alone buying land fill accessories to improve them. I do wish Martyn were into photography because I'd love some real photos of me on the farm, especially as we grow older. So these will have to do. Not easy getting 2 big white heads in there...maybe I do need a wand thingy. The President has one I think.

I spent most of the afternoon shearing [for lack of a better word] dear Sophie. A sheep friend out east explained how the wool will rise and then it is easier to slip the scissor under the matted part of wool. This proved to be true. Part of her body was pretty easy. We went swimmingly along and then I reached an area that felt like I'd never get it done. But we did it. I had bought a pair of real sheers but found them annoying 50% of the time so switched to my art scissors. There go my art scissors. But they worked. I will have to educate myself better on shears. I was pleased I only nipped her once, and was pleased to see not too many lice, even though she is treated regularly with all that wool how can you not have some. The one thing I almost blew it on was I forgot she had two waddles! Fortunately for her I was going deliberately slow so no harm was done. She was so happy to have her waddles cleaned off and scratched. They were crusty and itchy. Sophie did really well, I was proud of her. She was very patient considering how long it took. She and Victor both have birth defects that make them crippled in their rears, but Sophie is not as bad off as Poor Victor. She was able to stand the entire time, Victor won't be able to and the small amount of trimming I've done on him, he hated it. So I'll rest for a week and do him next.

I'm going to use some of the wool for my puppets and dolls I'll be working on for the upcoming show.

It was a beautiful weekend, full of farmy things-vegetable planting, trimming some feet, cleaning field water buckets, mending fences and now...time for a shower and some wine in the garden. The lilacs are at their peek, the bees and Buzzies are here [hummers] and the garden is showing rose buds and all sorts of delights. It is a beautiful time, before bug and gnats come-but they are on the way. 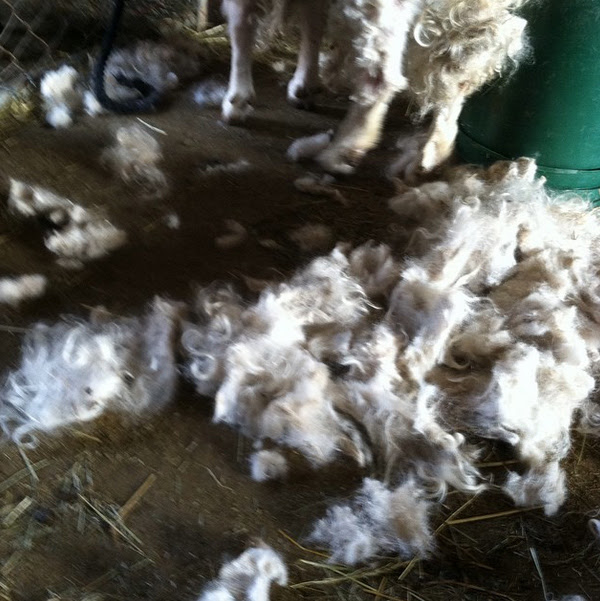 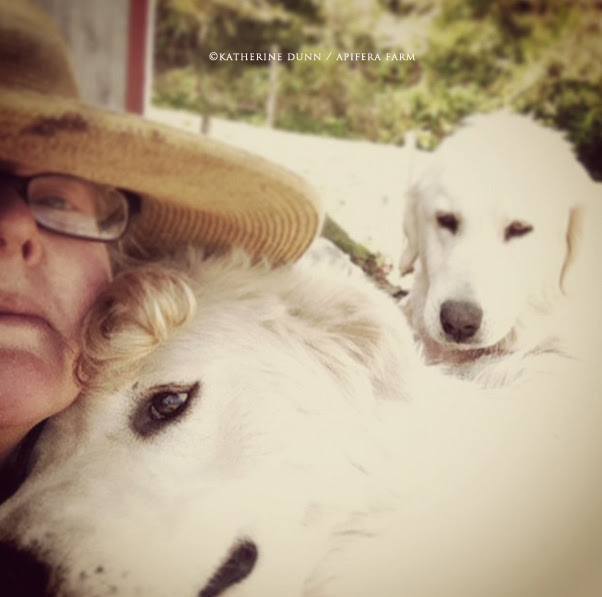 Your selfie came out pretty good. I can't take one of myself worth a dang, which is a good thing. Like seeing those big white heads. As a lefty I find that many tools meant for jobs force me to find something that works for me too. Glad your art scissors worked. xox

I love those two white beasts :)

Is that Benedetto leaning on you?

I'm going through a phase [or maybe it isn't a phase,] where I can hardly stand having a pic of myself taken. Yes, that is Benedetto leaning.

I can relate to your feelings about selphies! I was asked for a bio picture and I have so few since I'm always behind the lens. Too bad we were'nt nieghbours, we could induldge in some photo shoots of one another! Your a much braver woman than I for giving the shearing a go!!

It's a stage, Katherine. Having a photo taken lately makes me cringe, which isn't the best look for a family picture or a selfie.
It's been hot up here too and I wish I could shave off a layer of wool to cool down!

Benedetto leaning on you is almost unbearably sweet

Is it a stage, I hope so. I was looking at some pics from Pie Day from 5 years ago, I was 52, and I thought, man, I've aged! but then I thought, well yea, knuckhead you have aged, so go with it. So I think I'm trying to figure out what I look like again, in this new next 10 years.....Benedetto is the biggest marshmallow hug around!