Kidnapping out of the sky-goodbye dear duck 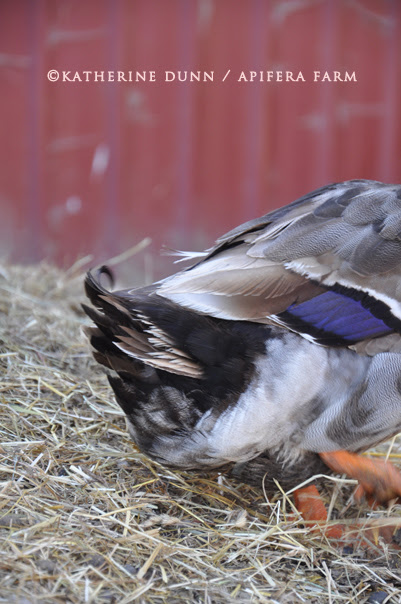 Sunday afternoon update: It's official. We saw the a bald eagle swoop low over the barnyard this afternoon. I'm proud to say The White Dogs made a run for him and made a raucous, he turned and flew up and in another direction. Part of me is relieved-because I know what I'm up against, and because I can't out smart an eagle. I'll try keeping everyone in lock down for the next couple of weeks. But when you live on a river, it's their river too. I'm just glad his carcass wasn't a waste, as the eagle would have taken it all.

We lost a duck yesterday. Out of the blue, out of nowhere, unseen by either of us as we worked outside all day. He was most likely plucked out of the sky and didn't see it coming and if it was an eagle as we suspect, it was a quick kill and he didn't suffer.

There are two consolations. One, his body most likely will feed baby eagles, or a mother brooding them. Two, he lived a long life, much longer than your wild duck, or cooped up duck. He died in Nature, in a field, eating grubs, amongst his little flock.

I was wishing I had witnessed it. But then thought it would be a haunting image, even if I adhere to the philosophy this is what Nature does, it recycles. It does not judge, it simply takes and gives, over and over. We are the graced ones for her bounties, and in return we need to be good stewards to the land.

The Bottomtums arrived at Apifera in 2011, after one of my vet's had a client call me–she had to leave her farm after her husband was diagnosed with terminal cancer. The old goose that had been the den mother to the ducks also came, and her name was and is Priscilla. Priscilla was over 20 then and is now in her elderly years but still pops out an egg every now and then. We call them Granny Eggs. When they arrived, their wings had been clipped and I didn't want them to leave the barnyard, even though my vet wanted me to let them free range and eat slugs and snails, which can host parasites that infest the sheep in spring. But the ducks and their old goose were very content in the barnyard, and never ventured to the fields.

I don't know what possesses a duck to get up one day and declare,

"Let's go to the lower fields for a picnic! Come on!"

But after spending four years in the barnyard, maybe they sensed there was an entire world of mud and puddles down there. So for the past few months they have been free ranging about, with the piglets and lower Misfit Village gang. Some days they go to sleep in their old duck hut, and some days they randomly return to the goat barn where they wintered. I let them decide.

Last night when I did feedings I noticed a male was missing. They never separate. I looked everywhere, and just couldn't believe he'd been nabbed out of the skies. But that is the only possibility, unless he dropped dead, which chickens often do. He is old. While you might think we would have heard a lot of commotion, I have seen the animals over and over show that they respond to death so calmly. Fear makes them act up, but there might not have been a reaction because an eagle might have nabbed him about ten feet from the others and they didn't even have a chance to fear since they were busy eating with heads down. I wondered if it was a hawk, but researched it and I guess that would be too big a haul. We've only had one hawk strike, right before my eyes, and I think the body would be there without the head, the usual hawk evidence. I am going to do another walk about to see if there are any feathers but didn't seen a sign yesterday. We have a farm friend down the road who constantly loses big geese to eagles, and we've seen him on out riverfront.

So The Bottomtums are in lock down in the Lower Misfit Village where they can swim in the piglet puddle and roam about. I am not sure if they will be venturing into the fields again. Then again, I can't control Nature. We live with her.

The male ducks have such beautiful colors, so many variations in their feathers. The iridescent qualities int he sunlight are gorgeous. Their little curled tail tips [the females tails don't curl] are like carefully coiffed bottom bow ties. I appreciate I got to live with such a fine duck, and that he had a good long run. I will miss his waddles and beautiful neck, and how he loved his private bucket to float and splash in. But I will also enjoy the remaining Bottomtums. I would feel dreadful if I lost Priscilla to an eagle, and feel I must do my best to protect her. But that is the human in me judging Nature's way-to die by an eagle is just as worthy a death as lying in a hut and not waking up. 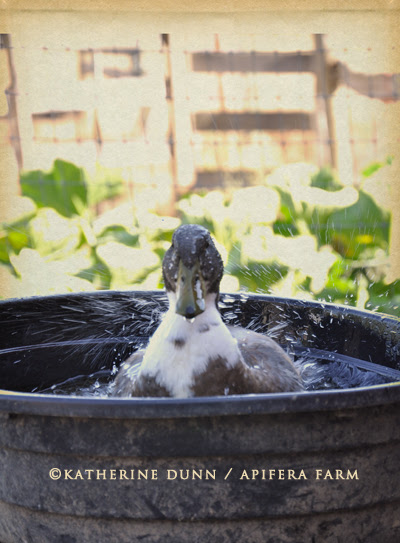 Email ThisBlogThis!Share to TwitterShare to FacebookShare to Pinterest
Labels: The Bottomtums

Sorry about the loss. Our ducks are 9 and going strong, luckily no hawk or eagle strikes, and we have both here in the new house. They do stick together don't they and move as one almost. I am not a chicken person, but I do love those duck antics. xox