Pédro and Juanita - A Love Story of Mice 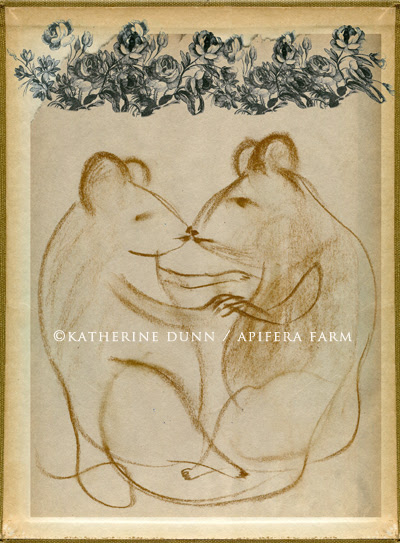 That is the first thing Juanita would hear in the morning upon waking, and the last thing she heard at night before falling off to sleep. No matter how busy his day, how horrible the winter weather, how many cats had almost killed him while he hunted for her - nothing stopped Pédro from saying those three words to Juanita. And they were not spoken lightly or in a routine manner out of habit. Each time he said them, they felt very large to her, like the way the people's feet looked when they walked by the kitchen cupboard where Pédro and Juanita spent their nights.

They were distant cousins living on the same farm in adjacent hay bales in the horse barn. They met in spring under dire circumstances. Juanita was quite a bit younger than Pédro and less experienced around all the various obstacles in the barn - cats, owls, dogs.

One morning she was making her way to the cracked corn bin, a usual routine for her, when one of the 20 barn cats swooped down on her, placing his paw over her tiny body. She froze -and eeeked.
But she was released and each time she felt she was going to make it back to her hay bale, another cat would fly down on her, batting her back to another cat, or toying with her while she aimlessly scurried here, then there.

From a corner, Pédro had entered the barn just as little Juanita had taken her fifth or sixth batting by a cat, and he mindlessly went to her rescue. He scurried onto the cats back, sitting on its head, eeking loudly, so the cat stopped to swat her head, and Juanita could get away - he then leapt into a crevice between hay bales where he was safe. Eventually he was able to make his way through the intricate tunnel system his clan had created under the hay bales, and back to his hay house, where it is said that his tail had turned white from the stress of his encounter.

It was not long after that, days perhaps, that the two mice became constant companions, and then, as is only natural, lovers. They were married in June, before the hay was cut so their wedding was safe from large tractors and well hidden from lurking cats and coyotes. By fall, they had moved into the Big House, in one of the lower kitchen cupboards where flour and sugar was kept. There were no cats inside and the dogs were all harmless and crated at night.

Things for the newlyweds went well through the winter. Soon, Juanita announced that she would have babies, and this made them both start hunting more and bringing as much into their little living quarters as they could. Pédro had discovered good things on the counter top each night, including a pan of bacon grease and a mousetrap of peanut butter. Now all experienced mice, and Pédro was experienced, knew what a mousetrap was and they knew that humans had figured out a mouse's one addiction - peanut butter. Juanita begged him not to go near the traps, saying she did not have to have the delicacy. But Pédro -who once carried a walnut 300 feet in the rain for her dinner-felt he had the experience and skills to outwit the trap in order to bring his beloved such good nourishment.

And on a night like any other, Juanita watched her Pédro go out for food, and minutes later, she heard,

She raced out to see Pédro dead, his neck crushed in the trap. She caressed his cheek, kissed him and quietly said, "I love you."

She lingered, but only for a second before a light in the adjoining room came on. Her thoughts were a mixture of grief and fear as she scurried in the dark to get back to her cupboard. And then,

crisply rang out to her little ears.

And she thought no more.

As the trap crushed her neck, she was immediately lifted up into Pédro's arms, and she heard his voice say, 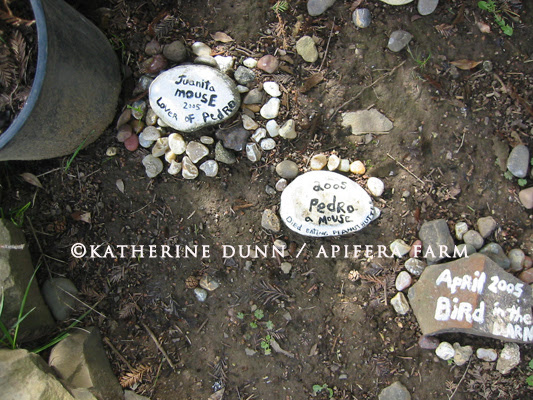