The Story of Mama Kitty 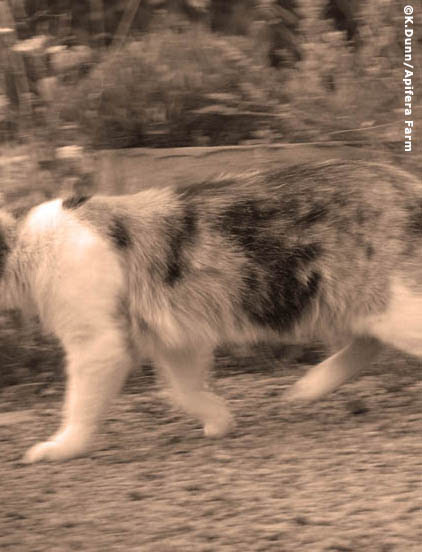 One of my many ongoing projects is compiling stories from Apifera to be pitched to publishers as a collection. It's A combination of fiction and non-fiction, illustration and photography, whim and tears. Here is a story from Chapter One, The Cats of Apifera.

Mama Kitty...in which we are introduced to the first cat of Apifera.

She had no name, and had never had a name, but as she saw it there was no use for one.
Her age was most likely hundreds of days, but she had lost track, as there were more important things at hand, like survival. She had begun life in a burnt out truck, cohabiting with mice and rats, until she had to kill them all for food.She was not mean spirited, but she chose instinctively to eat, versus not eat. At the time she was heavy with kits, and often ate double her normal meal, when she could find it.

The clan who owned the truck, or who trashed the truck and left it to rot into perfectly fine soil, had recently brought home two new dogs. Though they were small spaniels, they were nothing short of a nuisance. She could have wiped their eyes out had she chosen, but why waste energy, and like I said, she was not mean spirited. So she took her overloaded belly and moved to the farm up the hill. The former occupants had left months ago, and the place still sat empty, so she knew there was no danger of dogs, or being shot.

She had only been there a few days when the moving van pulled up to the old farm and a man and a woman emerged and began unloading things into the Big House. She viewed them from a safe distance in her preferred perch in the old barn and watched for insights to the couple’s essence. A slight move of the woman’s hand indicated she was happy, maybe even excited; a laugh from the man showed he was not in a state of mind to provoke her.She sensed enough to feel comfortable staying in the barn for the night, because she was very close to having her litter.

Within days, she did have her litter, five healthy kittens. One was very red with Tabby markings,two boys had soft blondish red fur like her own calico markings, one girl was a dusty, mottled mix of calico and tabby. The final kitten to be born was also the teeniest, so tiny, like a little mole with a long tail. The mother kept the runt close at hand, giving her as much chance as she could to survive.

The woman of the Big House had spotted her brood as they had taken to playing in the sun.She cooed and made sensitive remarks to them, and she also began putting food out on hay bales.While mother ate, the kittens romped. While she still did not let the woman touch her, within weeks she allowed her kittens to be held.

She went on to create a small dynasty on the farm. So cunning a cat was she, that it took the woman two years to trap her. While she flailed and fought the trap, she found herself free two days later, back in her barn surrounded by her many children. She never had children again, which was quite a relief to her.

The woman had a habit of naming any creature on the farm, and even though all her little kittens had unique names, she had been crowned ‘Mama Kitty’. Years earlier, she would have scoffed at this, but now tired after years of nurturing, she rather liked the name, and felt a bit nourished herself.. As time went on,she left the old barn to reside on white wicker on the front porch of the Big House. She remains quite a stoic cat to this date, but every so often, one sees her playing with one of her sons, just like a kitten.

To this day,she has never allowed the woman to hold her, preferring the touch of her own kind.