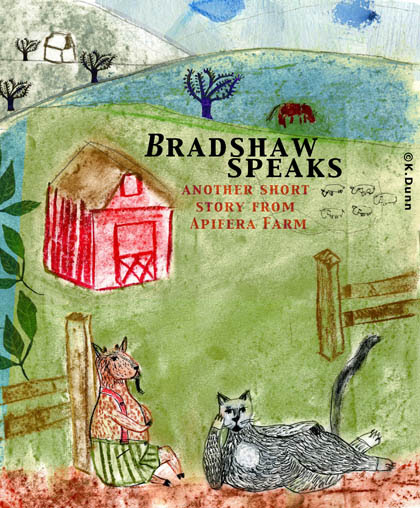 In which we learn exactly why Mr. Bradshaw left...and returned.

"So, was it bigger than here?"

"Bacon...oh, bacon...there's never bacon here, that would be a good reason to stay there, I guess."

Frankie the pygmy was reposed, as was Mr. Bradshaw, conversing about his recent Walk Away. He had taken off on his own and had been residing alone, unbeknownst to anyone, in a pump house on a property up the way.

Mr. Bradshaw had arrived at Apifera as a young bully cat, about a year into the dirt farmers showing up.He had heard about the cat coverage there, and his accommodations up the way were not that desirable, but that's a whole 'nother story. So he made his way to Apifera, like many before him. And he had been living there without any fanfare for over 3 years. Well, there was that one incident, when he was trapped by one of the dirt farmers and held captive for 2 days, only to wake to a woozy feeling in his crotch area. He refers to it as 'the day my rear berries shriveled'...but he eventually held no grudges for it, for he found his mood was more relaxed, and he was less uppidity around felines of the girly variety.

"I just don't understand why you did a Walk Away..." Frankie continued.

Bradshaw was not the most wordy of the tribe, but when directly asked a question, he would answer. This was the exact opposite of many of the first tribe members, such as Angustifolia, aka Gus, who was known to mull over questions for days before providing brief two or three word answers.

"Well, I just felt I had to see what was there." said Bradshaw.
The two sat quietly, Frankie chewing cud and Bradshaw occasionally lifting a front paw to glean it. "It gave me perspective..." he went on.

"But have you ever looked at our farm from a mile up? " he asked, pointing to hills a mile up.

"No, I never leave my barnyard." she answered. "What did you see that I don't know about already?" she asked.

"Well, at sunrise, Boone looks really ruby red, but he looks small. And the rust on the barn blends nicely with his color. And the sheep move in combinations and leave trail of dew, like a ball of string on the open fields. There's land up behind the barn dotted in yellow spots, it's very soothing. From up there, Frankie, you can see an overview of the river, and it all seems connected to the pastures that are connected to our barnyard. The fence lines look like veins and the whole farm feels like it heaves up, and down, like a beating heart."

Much silence followed between the two. Frankie finally spoke.
"So why did you come back, especially if it smelled like bacon?" Frankie asked.

"Bacon's a temporary gratification. The view of our farm from up above was only missing one thing. Me. So I came back to my place in it."

The two continued to sit on in the same spot, even though the conversation had reached it's natural end. Bradshaw had gone into a Cat Awake Asleep state, and Frankie continued to chew her cud...only she was pretending it was bacon.
--The End--
Posted by Katherine Dunn/Apifera Farm at 2:50 PM