And what mothers and daughters can learn from chickens and sheep...

My mother is visiting for two weeks from Minneapolis. Having your grown mother [or "ripened" as she now calls herself] in your own grown house is nice...but crowded. I know most of you know what I mean - no matter if you're the visiting mother, or the hostess daughter. No matter what the mother-daughter relationship might be, someone's wings always feel a bit clipped. I feel a bit like a little hen that went off to the woods, discovered a forest all on my own where my eggs came out gold, and I rush back to the hen house to tell everyone of my discovery, which I found all on my own. But my mother hen shows up and say, "Oh that's nice, dear. Do you have any cream? And can we turn the heat up."

Am I complaining? No. Do I love my mother? Yes. Did I have a nice, wonderful child hood? Absolutely. I kept salamanders in my bed, wore red rubber boots at all costs, 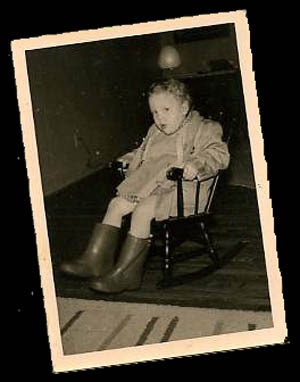 and hummed alot. But I was always snorting around in the woods, creating my own worlds, where I could think on my own. Preparing for my eventual golden egg journey. There were a lot of "You're so emotional" comments. Or, "You're just too sensitive for your own good." After a time of hearing such comments, a little creature can only believe "Hmmm, they're right, I am. I must be a freak or they wouldn't keep bringing it up." I was unable to comprehend at that young age how that same emotion would someday make my eggs so golden.

My mother came out at breakfast time yesterday, announcing there were so many spiders in her guest bathroom, so she killed them all. Of course she thought this was what any proper guest would do.

"What?! Not the Daddy Long Legs! They were a family!" I said.

"But you killed that spider on the couch last night!" my mother exclaimed.

"I didn't know him, and he wasn't a Guinevere spider."

"What is a Guinevere spider?" my mother asked.

"All the Daddy Long Legs, no matter what sex, are Guineveres. All those flat brown bugs are Ernies..."

"So what are the big giant brown spiders named, like the one on the couch you killed?" my mother asked.

"But you killed him." she said.

"I know, and it was an overreaction on my part to his natural spider need to climb under the blanket."

Eyes roll from both females.

Human mothers seem to come in all sorts of ability levels, but the chicken mothers always seem to have a good system of teaching the basics: stay under my wing until you can fly, water keeps you alive, lay an egg but don't get to attached to the outcome, and for heaven's sakes "If you see a camera, make sure you have on clean underpants."

As I did barn chores this morning , I thought of our head ewe Rosie, our first sheep who tragically died last spring. When Rosie came to our farm she came with her daughter Daisy, who is still with us. Daisy spent every day of her life with her mother. When Rosie died, I thought Daisy might take over as head ewe, now that she had seniority in the flock. But she didn't. Always in the confidant shadow of Rosie, she never learned to be a head ewe, she didn't need to be, or didn't have space to be.

So mothers, when you visit your grown daughters who have now become head ewes, with shelves lined with golden eggs, best to just stand to the side a bit. This way you can admire your creation, and have a good vantage point if you see a head butt coming your way.
Posted by Katherine Dunn/Apifera Farm at 11:12 AM

This is wonderful writing, Katherine. I thoroughly enjoyed this post. You have written one of your best. Wonderful!!

lol! i did not inherit the cleaning bug from my mom either...just the bugs. make tea and enjoy your visit!

As a 52-year-old very independent woman who has had her mom living with her for nearly 10 years, all I can say here is AMEN! I love my mom and am happy she feels safe and cared for, but I often wonder aloud how she thinks I got to my fine age without her help! (And by the way, my dad named all spiders in their house "Horace.")

Such a sweet, true story, and I adore the photo of you in your red boots - a kick-ass babe from birth!

The fluffy chicken pantaloons are lovely.

What a wonderful post! You are a painter of words that wrap their way around your heart and tell the kind of story that keeps you warm inside and your soul happy. Thanks so much for crediting my photography.

I love this post Katherine and can so relate. Also, I think that is the cutest chicken behind I have ever seen! Cherish the moments, they provide for wonderful memories.

I so adore the person you are to me.

Thank you for that.

Bless your heart and hers too...such lovely writing and I am lovin' those red boots! And here is an interesting thought. My son, who knows lots of interesting facts about nature (the farmer boy in him) swears that he learned in school that daddy longlegs are dreadfully poisonous but cannot open their mouths enough to inflict a bite! Don't have a clue if that is true or not, but maybe your Mom knows more than you think...! Just wondering...

What beautiful writing!! I think you are so fortunate to have your mother visiting you and be able to share it with us all. Your photos made it even more enjoyable. What variety is the lavender you grow? I have the bouquet you sent me still and it's so lovely.

Gee, I guess the subject of mother-daughter relationships is a hot topic....or is chicken underpants?

For the record, today my mother said, "Did you notice the TV screen is brighter?"... Ah well...

Kathy- we grow several varieites, Grosso, Provence and several Angustifolias Not sure which one you have, but they vary from sweet to camphor.

lol....thank you for such an inspiring visit! Love your work!

Katherine you are indeed a talented writer, with a gift for words and ideas. Keep the golden eggs polished and drink a little wine to take off the edge.

Lovely. I love your golden eggs.
Love the spider conversation.
Lots of smiles over here where I am
Terry