In which the stunning event mentioned in the last post is revealed to my readers. Proceed with an open mind, or don't go in at all....

The music was so beautiful, a cross between blue grass and traditional Italian waltzes. I had no idea Angustifolia played guitar, and certainly not at this level. We could hear the variety of hooves and feet stomping to the beat, and amazingly, even little chicken feet resonated. A dance stage had been rigged up, made of various pallets that always can be found in old barns. Martyn was speechless, as was I, but I soon found my grounding. I have lived long enough, on earth and this farm, to know it is best, when presented with magical events, to soak it up calmly.

We huddled together in the dark shadows for some time, waiting for an intermission of the beautiful melodies being played by the cat - bird band. As soon as the song was over, I approached my animals. Usually, I am told, when a two footer comes upon any animal standing upright, the animal will immediately go down on all fours, so as not to ruin the secret standing skill they all possess. But I was amazed that they all continued to stand upright while I approached. I was honored. 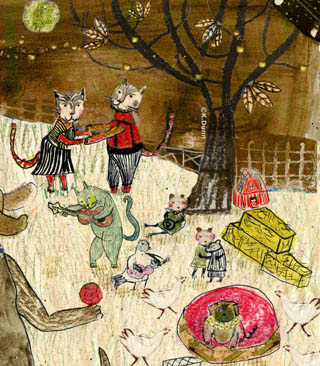 Boone came to me, and like in a dream, his horse voice was laced with human words. "We are having a dress rehearsal," he said matter of factly. "so we can be properly prepared for the real event." Just then I noticed Frankie scurry out. "Would you like some swill?" she said, as she handed me a glass of a very foul smelling beverage. "Highly volatile, but good for celebrations of monumental magnitude," she said. I never knew my pygmy had such a big vocabulary. Old Guinnias limped by with a cane, headed for the pie table, and looked so gentlemanly in his attire.

I called Pino over, as I knew I would get to the basic facts faster with him, even if he spoke slowly and deliberately. "Pino, where did you get that tux?"
"It's my grandfather's." The things a farmer never knows, unless told.

Pino went on to explain the situation. "The Big Eared Day is happening on Tuesday. Like small children, we were encouraged not to attend. But we want to celebrate properly, and the magnitude of the event requires our dress rehearsal tonight." 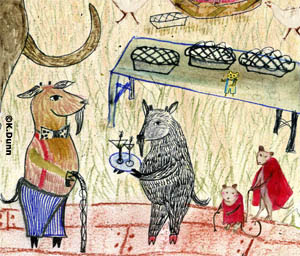 "I see," I said calmly. And then Angustifolia tapped his foot, and the music began again. Martyn joined me now, and we sat together on a hay bale that the creatures had dragged out. We spoke not a word, but took it all in. Pino danced with his mother, Gabriella - I have no idea how she got to our farm unattended, as she lives 2 miles up the range. She looked lovely, painted toes and lips. The ewes did not partake in dance, but I could tell they really enjoyed the festivities, and they giggled like young lasses with dance cards. Perhaps one of the sweetest sights was watching the hens dance around the one eyed pug, who is night blind, and sat on a red cushion enjoying the vibrations of the music and dance, and the smell of fresh pie. We both had a sip of Frankie's drink concoction, and secretly poured it out behind our backs, but Guinnias licked it up. Later I saw him do a twirl with Prairie Pussytoes.

Even descendants of Lord Jimmy came out, attired in red velvet, which I was told is the wardrobe mice preserve for highly optimistic events.

Frankie was the only one not dressed in farm black tie. This did not surprise me, but I did notice she had painted her toes for the occasion.

I felt so odd, but in a good way. What will I do with this information, I thought to myself. Can I share it, or is this an evening no one should know about but us, and the creatures at hand? Has the magic of this farm gone too far in my head and heart? Am I 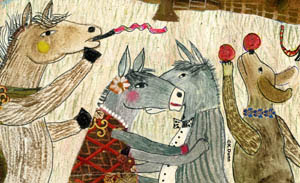 As we left, Pino walked up from behind me, and tapped me on the back. "May I have this dance?" he asked. I am not sure why, but a tear came to my eye.
I rested my head on his shoulder, and we did the basic box step, very slowly. He whispered in my ear, "Isn't it all wonderful?"
--The End--
Posted by Katherine Dunn/Apifera Farm at 2:45 PM