The story of Stella and Iris 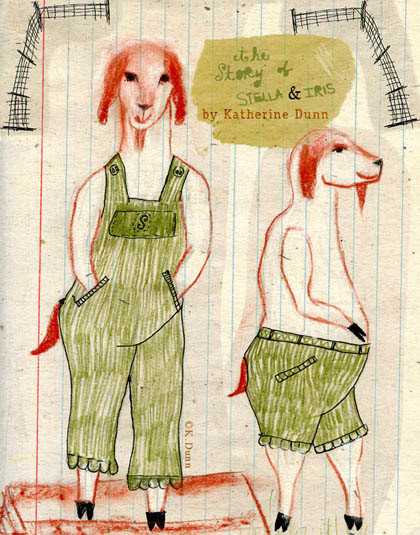 The sun rose like it did everyday, but today being Wednesday, it was just a teeny bit earlier than yesterday. So noted Stella, the largest of the two Boer goats sitting on a wooden pallet, surrounded in mud with the heads of new grasses peaking out.

"Gate is shut", she thought to herself. Then she focused her attention inward, while she chewed her morning cud, listening to the sound of it, and tasting the after effects of the hay she ate earlier. Up the way, she heard new spring arrivals singing frantically, like an orchestra tuning up."Birds," she thought. "Young."

"They need worms," said Iris, Stella's pasture companion. Stella and Iris had been together since birth, though they were not sisters. Born of the same father but different mothers, they shared some of the same genes, but like many mixed families, the two were very unique. Stella was clearly the leader, the 'send her in" gal, the one who led without trepidation. She was calmer, more stoic, and more friendly on a consistent basis. Stella was the 'thinker' of the two. Iris, her full name being Wild Iris, was just that. She had an expression to her lips that made you think she was smiling, but just as you warmed to the smile, it turned to a grin, and then a laugh. She was voted "Most like a monkey" by her human caretaker, an honor Iris was very proud of. This honor was bestowed on her due to her ability to climb anything, and swing from trees by holding onto small branches with her teeth. And if Stella was the 'thinker", Iris was the "doer". 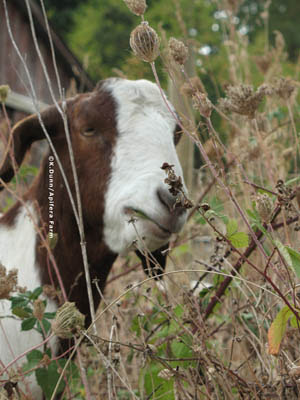 Stella and Iris had been together a long time now, over 5 years, and they were like many seasoned couples. They could communicate with glances and finish thoughts for one another. They could entertain each other one day, and require a little 'me time' the next. They led a fair and balanced life, and had landed on a farm that provided all the necessities of a good goat life- shelter, water in a bucket freshened daily, and natural shade areas from the large Savannah Oaks on the hill. More importantly, they had a purpose in life, to clear bramble, and this made their souls strong and effervescent to all who met them. Since their homecoming to the farm, they had cleared acres of blackberry bushes, poison oak, thistle, and scotch broom, all for free room and board. They took this job seriously, and except for their sun naps that happened precisely two times a day, they worked vigorously.

"Why is the gate shut?" asked Iris.

"She's trying to fix our fences up the way."
Iris giggled. "I like her, I really do, but why does she continue to try to roll a boulder up a hill, only to have it roll down again? Have the myths taught her nothing?"

Stella answered respectfully, "Yes, yes, I know. But in her mind, it's her job. She thinks fences will create specific boundaries for us. Like the way they have walls and doors in the Big House. She yearns for order."

"Order?" Iris said with a flipness. "The randomness of nature is order. Humans fret so about order, and in so doing only create more chaos, like that clear-cut up the way."

Stella added, "I heard her mumbling to chickens yesterday. When she mumbles, she usually sets out to try to create more order."

"Well, we'll just play along like we usually do, it helps her out I guess. She means well." Iris said, her soft side showing. 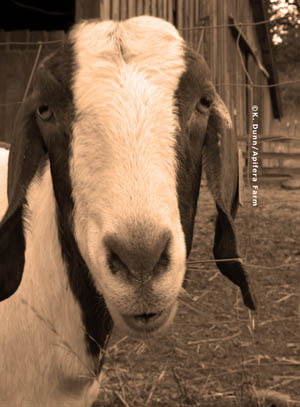 So the two goats sat unencumbered, enjoying the morning sun, and the lack of breeze, since the temperature was a perfect 55 degrees, and there were still no flies or gnats to pester them. They chewed cud, and did not speak, but stared off into the blue skies, deep in their own thoughts which I'll keep private.

An hour or so later, whose keeping track, the woman came and opened their gate. She spoke in her nice-nice way, but tinged with a bit of anxiety. "OK, now look you two, try to stay INSIDE the fence, please? I don't want you on the outside, I want you on the INSIDE." And she started back to the Big House. "I really mean it this time!" she yelled back as she was walked away.

"Yes, yes, INSIDE. We get it!" said Stella, as she stood up, stretched, and let out some oral gas.

The two headed out to do their usual loop, a path they had created over many years. It might not make sense to the untrained observer, but they started in the bottom wet area, since new grass heads felt tender and warm in the late morning, like a baby spinach salad. They walked the fence line, observing all the tidy little changes the woman had made to their many escape hatches.

Iris giggled all the way up the fence line. "I love it when she uses old hay bale twine, it's so festive looking."

Stella agreed. "She missed this spot.And that one. Oh, there's another."

"Stella, I'm getting that monkey feeling again." said Iris, who already had elegantly squeezed her body under the fence, going through one hot wire without flinching.

As Iris swung from the oak branches on the outside of the fence, Stella waited on the inside, reflecting on the situation in it's entirety. "I really should stay INSIDE the fence. There is nothing wrong with INSIDE. But there is the OUTSIDE, right over there. And I see nothing wrong with OUTSIDE. Inside-outside, outside-inside - they are one,are they not."

And over the fence she went.

--The End--
Posted by Katherine Dunn/Apifera Farm at 2:48 PM