The barnyard gasp had just sunken into silence when a faint, slow, click-clop was heard in the near distance. A small statured creature from the old barn quietly plodded out to the crowd, it's head bent.

"Pino!" Lucia cried out to him.

Pino took his place next to the Speaker, his eyes showcasing his remorse, his tail laying still out of respect for the serious discussion about to begin.

Boone began to speak. "It has come to my attention, thanks to an unidentified news source..."....and at this point I looked down at Huck, who gave me his best impression of Lady-Diana-Eyes. I immediately knew he had squealed, or accidental squealed. This is not unusual for Huck. So great is his joy for everything he sees and experiences, that he wants to share it, so he can't be trusted with secret information. He doesn't intend any harm, and often has no idea of the consequences. I let him lay his head in my lap, and I rubbed his soft chocolate ears - my way of telling him his secret was safe with me.

Boone went on, "...that Pino has broken a barnyard promise we all took some months ago."

Another gasp mixed with snorts-bleats-clucks was heard, but more hushed than the first.

"It seems that Pino has been twittering!" bellowed Boone.Pino's head drooped even lower. 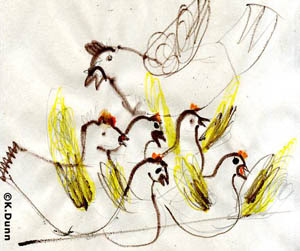 The hens erupted in a chorus of clucks, Pap Roo crowed, and the sheep bleated in union.

"Pino! We all agreed that tweeting was just one more craze that was creating a neurotic society said Daisy, speaking for the flock.

"Neurotic and self indulgent..." stated Boone.

And everyone started talking at once, and poor Pino just stood there, taking the brunt of it.

"Order! ORDER!" bellowed Boone. "As upset as we all our, we must give Pino a chance to explain his actions. Pino, you have 10 flies to make your case."

Frankie jumped up on her bucket. "Wait, he first must state his full name, for the record." 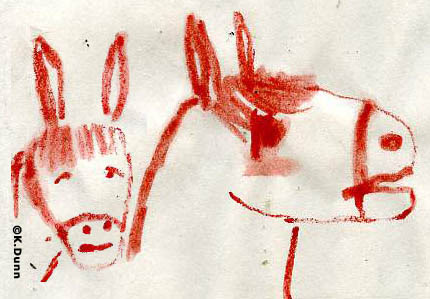 Everyone rolled their eyes, except Pino, who walked to Boone's podium
and stated, clearly and slowly, "My name is Pino Blangiforti and I am a donkey."

Pino cleared his throat. He looked for Lucia and Paco, which gave him courage. He looked over at me, and I gave him a knowing glance, as if to say, "Be honest."
Huck lifted an eyebrow, and then buried his head in my lap.

At that point I had to step in. I was trying to stay silent, which is really my role in any of these meetings. But I took to the podium and spoke, "Now look everyone, this is my doing. And while Pino went along with it, we decided to keep it from all of you, since we were tweeting as sort of a trial, sort of an experiment. We thought it might be a new way to share with the outside world. But we were skeptical, and just wanted to see what it was all about."

"Why aren't they called Dweets if you're a donkey? " mused Lucia.

"Or Baby Bleats?" ask Rosalita, the youngest of the lambs.

"That would be a Baweet", chipped in Blue, her mother.

"Order! We must focus!" said Boone. "Exactly what was the experiment?"

I went on, "Well, think of the ways the blog has helped us share stories and art.
Without it, I'd have no living. I reach people I never would have before email and blogs. It's brought good things to us, and I think we have valuable things to share. And when an animal needs help, like Old Guinnias for example, we reach out through the blogosphere, and help arrives. And we sell a print, some money can help other animals." 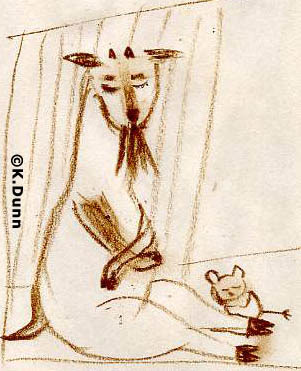 With that, Guinias suddenly awoke out of a deep nap. "Ah, yes, um, yes, I love Pino, I vote for Pino."

"Just go back to your nap, Guinny," said Boone to the old goat.

"But we are not talking about blogs, we are talking about Twittering. And we all agreed the ridiculousness of cramming a thought into 128 characters only helps provoke the already attention deficient, neurotic society who have a phone in one hand and a blackberry in another." declared Boone.

"Blackberry?" chimed in Paco, but he was hushed.

Boone went on, "And we also all agreed that letting everyone around the world knowing our minute by minute poop schedules, what our poop looks like, and what time we poop, highlights the worst of the self indulgent aspect of social networking."

"Well, I totally agree Boone." I said. "There is so much pointless chatter out there on blogs. If you are looking down and tweeting about the beautiful walk you are on, are you not walking just to tweet, are you not changing the actual natural experience, even if it takes 1 minute to tweet? Does the same person feel compelled to take a phone on a walk and call every 30 minutes and say 128 characters of experience to a person who isn't home since they are tweeting somewhere else? Are any of us really sharing, or is it like a cocktail party where too many voices are giving their verbal resumes at once? If you tweet at a meeting, are you really listening to the speaker?"

"Exactly. I still am not hearing a valid reason for tweeting behind our backs, " said Boone sternly.

I proceeded with my case. "Long before any of you, there were areas, like this farm, that had no phone lines. When phones came, there were actually people who resisted them as intrusions. Then there was radio, and TV, and laptops, and cell phones. All have come with annoyances, all can tempt the compulsive nature of most two footers, but with each new gadget, we can reach more and more ears, and we can share, and learn, and then grow or change. When I was little, we used to get people calling the house, and saying, "Are you Dunn yet?" and they'd hang up. It was a frivolous use of the system. But that same phone allowed the paramedics to get to our block to help a hurt child on a moment's notice. Twitter can be like that. We just have to figure out what messages we want to send."

"So Pino, what did you tweet about then?" Boone asked.

"Yes, and I told people I loved them." Pino said. 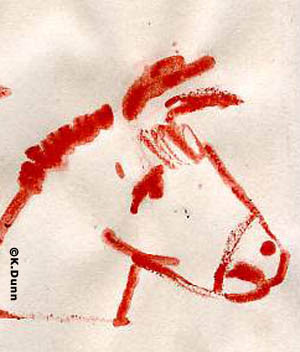 "But is it so necessary that you had to tweet it, to some one's phone, while they were driving, or meeting, or working, or working while tweeting about their Facebook page? Didn't we agree that most messages can be put in a letter, or an email. Didn't we agree we felt our stories were worth more than 128 characters. Don't we want people to read, and stop and think about it for a second, and feel it, relish it? Pino, didn't you just add to sea of useless information that prevents people from focusing on their own life's work for the day?"

Pino looked sullen. "Yes....but a revelation came to me when I saw how Twitters helped the people in Iran. So I thought my satisfaction with such a simple thing as a berry might help the world, somehow..."

"Your delight in berries will help bring democracy to other nations?" asked Boone, sarcastically. Pino sunk his head.

"Look everyone, " I went on. " I'm as perplexed as Pino as to how we fit into Twitter, or if we should fit into it. Isn't it enough we blog, and write, and illustrate, and email, and facebook, and even write letters? Pino and I talk about this. But there was a time when some people scoffed at email. We can't get left behind. But we can't follow blindly either. We must explore this as an opportunity and search out the merits. I think we need to readjust our perspective. Let's try to decide if we can use Twitter responsibly, politely, helpfully, with meaning. Let's start thinking entrepreneurial about this."

"Imagine if Black Elk had had Twitter...." said Pino.

"Or any of the Three Stooges..." said Frankie. And everyone stopped and stared at her. "What?" she asked perturbed. 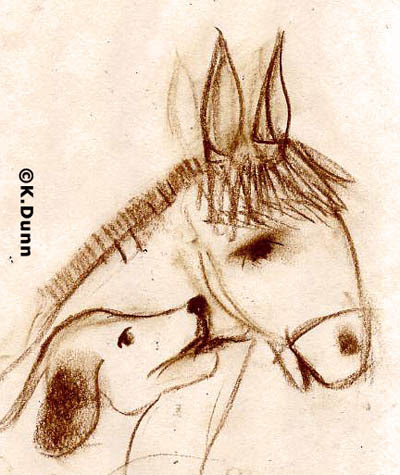 Boone pounded his hooves. "Order! I think we have heard enough. Let's vote - who here feels we should explore our place in the Twitter sphere?"

All feet and wings went up except Gus's, one of the cats.

"I refuse to be controlled by 128 characters." Gus declared.

"One 'nay'. Let the notes show Pino will try to find an Apifera way to Twitter."

I quickly added this to the meeting notes.

Then Boone raised his hoof in the air, and sternly stated, "And I declare that Pino was only working from his heart, trying to tell a wider audience about berries...."

"Order!" Boone boomed. "We will all join together as one, and think of ways we can use Twitter properly. Now, how many in favor of forgiving Pino?"

And a multitude of hooves, wings, paws, toes went up, to many to count.

And with that, one small hoof went up...

It was Pino's. He bent his head and with a quivering lower lip said, "I'm so sorry I disappointed everyone.".

Huck rushed up to the little donkey, and kissed him all over his body and face, until Pino sat on the ground and laughed, and laughed.

The crowd started singing "Put on a Happy Face", one of Pino's favorite songs. And Old Guinnias woke up. 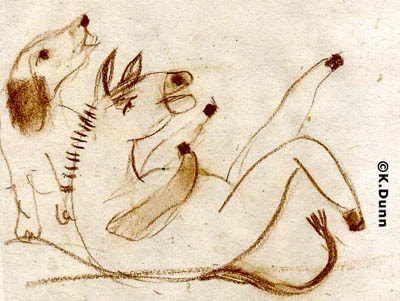 Congratulations! If you're reading this sentence it means you read all the way to the bottom of the story, and don't suffer too badly from attention deficiency or Twitter disease. If after reading this story, you want to tweet Pino your ideas on how he might Tweet in an Apifera appropriate way, please do so here. Please, serious tweets only.

--The End--
Posted by Katherine Dunn/Apifera Farm at 2:54 PM