In the arms of the land 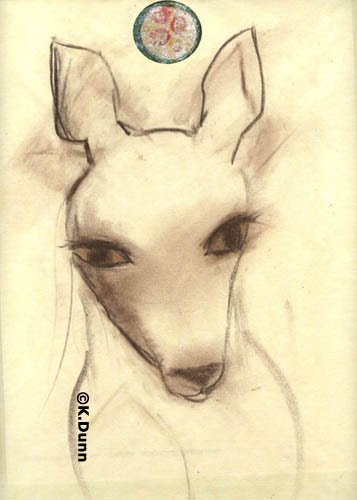 Her mother was experienced with life and knew the farm land she grazed was safe, knew there was a running stream, and knew the many areas of woods would protect them from weather and prey. She knew that on rainy nights, the old barn was open to allow them to stand protected out of wind and cold, and that often there was left over corn from what sheep had not eaten. She knew that the sound of the door shutting around 7am would be followed shortly by a woman's voice saying "Good Morning" in a sing song tune, over and over, as she walked the farm to let out various animals from the safety of their night time stalls. Within time, she knew it was even safe to stand still within 20 feet or so of the woman, and she would listen to her talk, and say things she didn't understand.

And now that the loud bangs in the air had been mostly absent for months, and the air at mid day was warmer, trees once bare were forming small clumps of color, the plum and cherries all had pink fuzz, she knew it was nearing and she found a familiar area in the Savannah Oak grove to lay down and bring Ethel into this realm.

It was an easy birth, so to speak, quick, no complications. She did not twin, which she had no opinion about one way or another. After licking and cleaning her new fawn, she ate well, and then rested some more. The two of them stayed in the Oak grove for two more days, and on the third, they set out on Ethel's first walk in the hay field. The cows were already up grazing, and included new calves from the week before. Ethel soon realized she could see the whole farm from the hay field, she could see the golden horse, and the many sheep, and each morning, she too would hear the woman come from the house and say "Good Morning" over and over again.

Little Ethel grew well, and soon became strong and agile and could jump all the fenced areas, and knew all the same spots her mother did. She had met other deer now too, and appreciated having some her own size that began to herd with them at night - for the nights were once again getting chillier, and the leaves were golden again. Ethel understood instinctively there had been a change, and the deer were more anxious at dawn and dusk. This anxiety was not discussed among the herd, it just presented itself on a daily basis. One morning as the moon became misty white while the sun dawned, a BANG! rang out from up above in the upper hills - it's echo carried though the farm and the deer all froze. Ethel felt apprehension, fear, danger, alertness, a fleeing feeling came over her heart - but she waited for the others to guide her. Her mother led her into the thickest part of the grove.

Some in the flock felt instinctively to move to other areas off the farm, and they quietly, and precisely, walked over a mile on a beaten path they had created into a more densely forested area higher up in the range. They grazed, rested in shade, drank from river streams. Ethel stayed close to her mother in the unknown land. It felt bigger. She heard a rustle, looked to the right instinctively, saw trees, saw brush moving, then heard a shot.

All deer around her fled. But her mother lay still, eyes open. Ethel's tail twitched frantically, she instinctively fled into the area where the other deer had flown. She watched from afar as men dragged her mother off. She felt nothing but fear, and a desire to flee again. But the herd spent the night in the thicket of trees, and Ethel stayed close to a young buck she had been bonding with. It was only before early dawn, before the sun rose, that they all headed back the way they had come the previous day. She became aware they were back at her birth spot in the familiar Savannah Oak grove, and she lay down near the hut that just 8 months earlier she had laid with her mother. Now, she lay with the young buck she had bonded with. The rest of the herd had wandered off to other properties in the nearby environs, but Ethel chose to stay on the land that she was born on, and the buck chose to stay with her.

As the sun was rising, Ethel heard the familiar voice of the woman starting the day with her sing-song 'Good Mornings" and she and the young buck meandered to the old barn and grazed old corn feed. Around the corner of the old barn came two bleating goats, followed by the woman, and everyone froze - goats, woman, Ethel and her buck. "Well, good morning, good morning to you too...You have grown so - Now I want you to stay on this land and stay away from the hunters. You're safe here," the woman said.

Ethel didn't know what the sounds meant that came out of the woman's mouth, but she did not fear the sounds. She did not react to them, or feel the need to flee the sounds. She already knew the woman was safe, for she had felt it from her mother, and she felt it in some unknown force in the sky and dirt.

But what she didn't know, was the woman was an artist, and on the very first day some eight months ago that the woman had first seen Ethel, and met her eyes, that very day the woman went into her house and drew a picture of Ethel, and she put a prominent guiding moon-star-sun above Ethel's head. It was the woman's prayer for Ethel that this one young, beautiful, wild and vital creature would always be guided back to her farm where she would be safe in the arms of it's land.
--The End--
Posted by Katherine Dunn/Apifera Farm at 2:39 PM