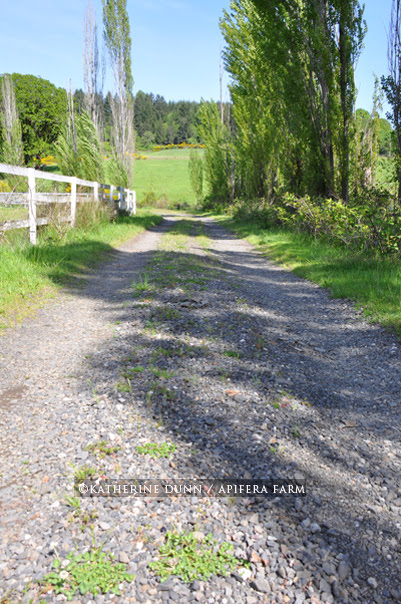 Stay tuned as we track this ongoing story here on the road.


This is the entry to our drive.

We didn't either, for some time. 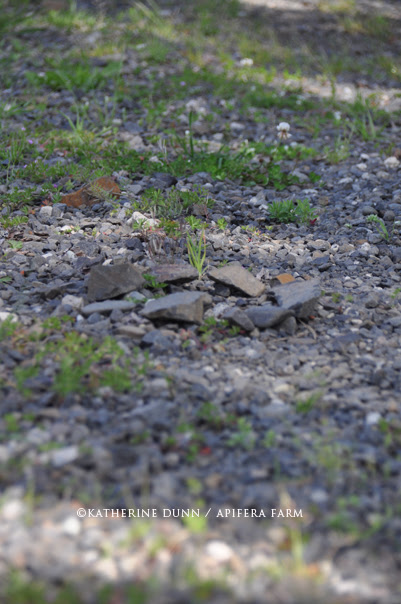 It was Martyn that finally discovered them. How many times we and others-farriers, vets, fed ex men–had driven over them is hard to know. We have a series of gate systems-The Head Troll has a map of all of them so don't even think about breaking in to this place. The front gate is shut 24/7 so when we come and go we have to get in and out to shut the gate. When we did come and go, we had begun noticing the annual Sand Piper game- they run to you and then away to divert you from your nest. Our first year here when we planted the lavender field, there were many nests on the ground. But this year, we would drive slowly up the road and there she would be, right in front of the car, then she'd fly off.

"Clever bird," I thought, bravely acting like the nest is elsewhere to divert me.

But then Martyn discovered it, as he drove up and saw her from a distance sitting on the nest. We groaned. How long it had been there we didn't know. But we opted to not move it, fearing she might just move it back, and place it less central making it a victim of wheels. Or if we moved it second guessing her internal judgement, we might place it grass but a hawk could see them clearly. What amazes me is she knew to put it in the center. Did she watch the cars for days before she decided to lay there? Or was it that the center is slightly concave and it felt safer? I put the rocks around only so we could watch it and remember where it is. This morning she was sitting it on it as I came to see it.

I was also taken with how each egg is placed with the narrow point facing down. Coincidence? I don't know, perhaps I can find time to research that.

What will happen if any eggs hatch is up to her and Nature. I imagine one morning I will check on it and all the eggs will simply be gone with perhaps a few remnants of their former home within a home.

I will not tell Paco about this. He has much to worry about, including Pino's privates and upcoming Pie Day. I will carry this burden on my own. 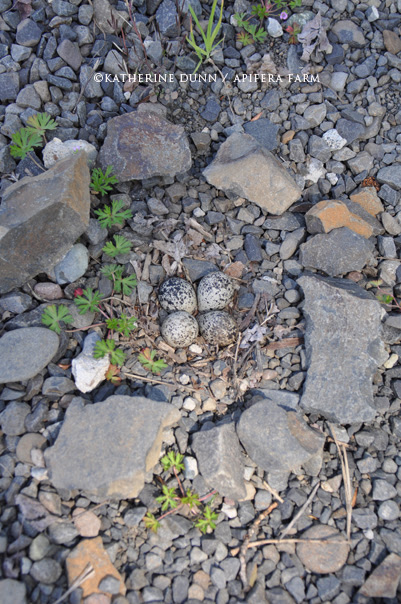 Posted by Katherine Dunn/Apifera Farm at 11:20 AM

Wow. And they are perfectly camouflaged in the rocks!

Maybe in the middle because of drainage?

Suzen, that is a valid point! Cynthia, I know, I mean, we didn't notice for so long.

amazing, but I think animals are always attune to what is going on , so I am sure she has her reasons, and i am impressed!